How A Medilife Trainer Saved A Life 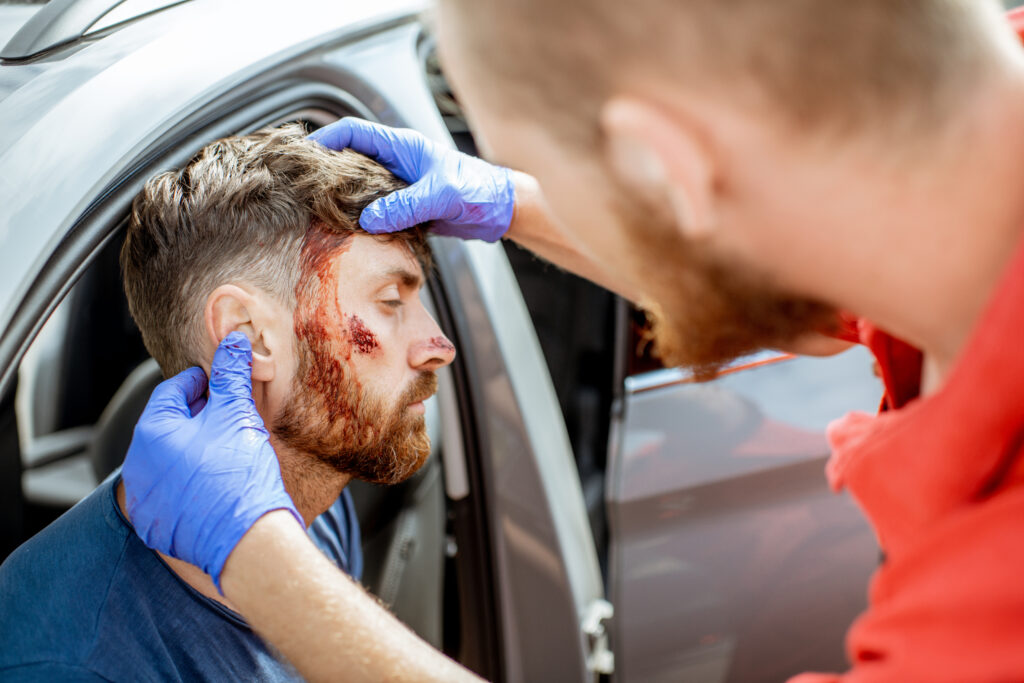 “I just closed my eyes, felt the rain and thought to myself: I can’t believe I’m about to die here. Then I heard Naomi’s voice again – that’s what kept me alive.”

It was around 8 o’clock on a rainy Thursday morning. Medilife first aid trainer and experienced EMT Naomi Laplain was on her way to conduct a training session for a regular client in Western Sydney.

She didn’t see the accident but arrived just seconds after it’d happened.

“I could see the carnage,” she says. “I stopped, jumped out, and assessed the scene.”

The scene was chaotic. The driver’s door of Klaus’s delivery truck appeared to have been torn completely off by the force of the impact with a passing B-double. “Like a can opener,” Naomi says.

Somehow, Klaus had managed to bring his own heavily damaged truck to a halt on a clearing beside the road. After removing his seatbelt, Klaus had stepped down from the cabin and staggered a few metres away before collapsing onto the grass.

Alongside him were his two passengers – both had been asleep at the time of the crash. One had a bad cut on his head, the other was physically unharmed but in shock.

Using the supplies meant for her training session, Naomi worked quickly, administering first aid to the wounded passenger before delegating his care to a passer-by who’d pulled up to assist.

Laying on the ground, moaning loudly and staring into space, Klaus was clearly the greatest concern.

“I could tell from my assessment that he had internal bleeding, busted ribs, deflated lungs, head injuries, possibly neck and spinal damage, and then multiple lacerations that were quite brutal,” Naomi recalls.

“It was a matter of just keeping him concentrating on his breathing – he started to worry about how sore his ribs and chest were. He was obviously struggling to breath due to the pain and the deflation and the pneumothorax he had.”

Naomi kept command of the scene while remaining focussed on keeping Klaus conscious, calm and alert.

With the rain still pouring, Klaus was wrapped in blankets pulled from the rear of his truck.

Despite his pain and injuries, he remembers the whole experience vividly.

“Naomi was so good at what she was doing,” he says. “I don’t know if she was scared or nervous, but she showed nothing but heart and was totally in charge – didn’t think twice, just acted.”

When the paramedics finally arrived on the scene, Naomi handed over but stayed with her patient – assisting as they carried out their own assessments.

“We ended up collaring him – I did the boarding and the stabilisation of the head at one point and then once the NSW ambulance doctors arrived, he was scooped up and into the ambulance.”

Soaked to the bone and with the adrenaline still running, Naomi continued on to work where, having taken a few moments to dry off and clean herself up, she got on with her scheduled training session.

“I must admit the attendees were all quite attentive – especially when they started to hear the gory details of my morning,” she smiles.

Upon contacting Klaus’s employers, Naomi was informed that he was critical but alive.

She often likes to check up after on the outcomes of her patients, for closure.

But as soon as he was able, Klaus was also keen to track down Naomi. For him, her roadside intervention felt like a miracle and he was desperate to thank her – face to face.

As he’d later tell Naomi when she agreed to visit him in the ICU, he recalled every word she’d said to him as he lay on the grass and believes that without her calming and caring presence, he may not have survived.

“At one point I just closed my eyes, felt the rain and thought to myself: I can’t believe I’m about to die here. Then I heard Naomi’s voice again – that’s what kept me alive,” he says.

“That was, to me, everything I teach,” she says. “It’s everything I stand by – you have got to talk to your patients, and you’ve got to be calm and confident. It’s so reaffirming, not only as a medic but as a trainer, to really think that what I’m saying is exactly what kept that man alive.

“I couldn’t stop the bleeding in his chest, I couldn’t inflate his lung and I couldn’t stitch him up and put him back together on that roadside. But what I could do was keep him alive by just reminding him: ‘You have to keep your eyes open and you have to talk to me – you have to keep breathing’. That meant huge amounts to me and I’m so glad we’re still in contact.”

Klaus, his parents, and his partner Kiara all feel understandably indebted to Naomi and are not about to lose contact with the woman they see as their “angel”.

The families now feel a strong bond that they hope to maintain for years to come.

The whole experience has also inspired Klaus and Kiara to pursue their own first aid qualifications as a way of being able to pay it forward.

“We’re just so thankful and we want to be able to assist and spread the positive,” Klaus explains. “That’s what we need more of in the world.

Get the latest industry news, training and offers from Medilife